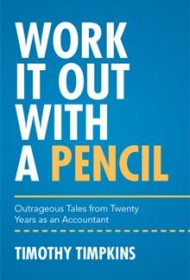 Autobiography is tricky. Done well, an author takes readers through a life’s journey to illuminate common ground or a larger point. Done poorly, the author comes off as stiff, or worse, self-indulgent. British author Timothy Timpkins’ memoir, Work It Out With A Pencil, shows glimpses of the first but often suffers from the latter.

The billing as “outrageous tales from 20 years as an accountant” is misleading, as it only skims Timpkins’ career as a management and project accountant for unnamed firms ranging from the airline to construction industries. Instead, the book focuses more on his nights out with colleagues and business travels.

Timpkins’ recitation of job switches, peppered with bawdy stories of strip clubs and drunkenness soon become offputting rather than endearing. In his attempts to be a raconteur, he comes off more arch than droll.  For example, he describes his decision to marry after an 11-year engagement as: “In true accounting style it was a decision made for all the right reasons; chiefly that should anything happen to my fiancée whilst still employed by the police service, I should not be entitled to her pension unless I was her husband. And some people say that romance is dead.”

His redemption comes when he opens his personal wounds. The aching vulnerability immediately elevates the book. He writes unflinchingly of his failed marriage and about how his depression jeopardized his career and forced a crossroads in his life. It is raw and sad, but more importantly, real:   “I had found myself looking out of the bedroom window at every sound during the night, hoping that it was my wife returning.”

Timpkins is a writer who understands pace and detail but doesn’t seem to recognize the difference between what works as a tale told at a pub versus something written. One hopes he continues digging deeper to hone his craft, as he clearly shows a gift for connecting with readers in his more intimate chapters.