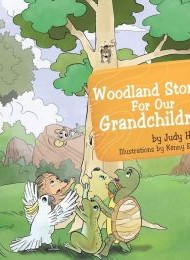 The animals Judy Henry encountered during a childhood in New South Wales, Australia, have inspired her to write this children’s story collection, Woodland Stories For Our Grandchildren.

The book consists of seven stories, with a revolving cast of characters including a possum, frog, mouse, tortoise, cockatoo, wombat, and echidna. The longest story — six pages —is the first one in the book, and by Henry’s admission in the preface, the first story she wrote for the collection. In it, Pete the Possum is embarrassed and hiding out in a tree; his friend Max the Mouse comes up to talk, but soon falls to the ground, as Pete looks from above: “He breathed a big sigh of relief when he saw that Max was safe. Pete wondered how that could have happened. He carefully reached around and pulled his tail to his front. Well, he tried to, but it kept slipping out of his little paws.”

There are no egregious flaws in this first story, but it meanders languorously at times in comparison to the later stories, which are shorter and crisper — just right for the young children who are the book’s target audience.

The characters’ visual depictions are appealing, and with only one picture per story, the illustrations generally capture the main character at some important moment.

Some installments aim to teach life lessons (don’t go into people’s houses without being asked; don’t try to change what you can’t change about yourself), while others, such as “The Tail of Max the Mouse” and “Timothy, the Tortoise Who Loved to Dream” simply tell short, sweet stories.

Henry plans more tales featuring these woodland creatures, and if she keeps a light touch and continues to develop the characters, young readers will be eager to see what comes next.