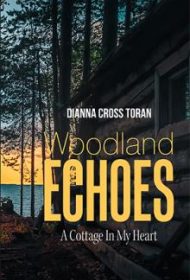 On the wooded shores of Michigan’s pristine Woodland Lake lies the small community of Woodland Park, a one-time resort community popular with African-Americans.  Dianna Cross Toran describes the area’s rich history in her detailed memoir, Woodland Echoes: A Cottage in My Heart.

Woodland Park was founded as the black middle class emerged in the early 1900s in America. Although this group had money to support luxuries such as vacations, they weren’t allowed or welcomed at existing resorts. Enter entrepreneur Marion Auther, who founded Woodland Park, offering vacation rentals and cabin lots to the black community, as well as a hotel, dance hall, and store. As new vacationers poured in, the resort expanded. Wrote white journalist Harry Spooner: “One of the most extensive places of its kind in the state, all of which is handled entirely by members of the colored race.”

Noteworthy visitors included gangster Al Capone, educator and activist Hallie Q Brown, boxer Joe Lewis and sociologist W.E.B. DuBois. Toran herself visited regularly with her family as a child and eventually returned as an adult. She is currently helping revive the resort town, which had declined through the years.

Toran writes in a folksy tone, offering numerous personal anecdotes. She also uses census records, newspaper articles, and copious interviews with those familiar with the area. Regrettably, much of what is relayed is only tangentially related (e.g. the story of her grandfather and brother-in-law’s escalator accident at the Chicago World’s Fair).  Often lacking necessary context, the flood of information becomes overwhelming.

While grammatical errors are infrequent, they are nevertheless distracting.  Additionally, chapters are peppered with breaks that often serve as abrupt transitions and sometimes highlight seemingly random quotes that make reading choppy.

Those with ties to the area will no doubt find this a pleasant walk down memory lane. But despite the fascinating history of Woodland Park, general readers are likely to be deterred by the extensive and often confusing level of detail provided.