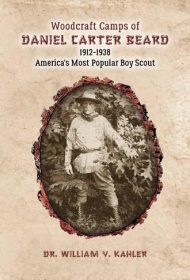 Born in 1850, Beard grew up in Kentucky with a love of the outdoors and an interest in pioneer life. He became a successful illustrator and author who wrote a popular outdoor activities manual, The American Boys Handy Book (1882). In 1905, Beard founded an outdoor education program for boys that merged five years later with the Boy Scouts of America. Beard became National Scout Commissioner, a position held the rest of his life. When the Culver Military Academy in Indiana sought to start a summer woodcraft school, they turned to Beard.

Woodcraft Camps follows Beard’s work running the Culver Summer School of Woodcraft from 1912-15 and his own Outdoor School for Boys in the Poconos from 1916-38. Both camps embodied Beard’s maxim that “A boy, like a tree, grows best with his toes in the ground.” The camps’ similar activities emphasized outdoor recreation as well as handicrafts, such as woodwork and leather skills, and instruction in Native American lore and dancing. Although neither camp was an official Boy Scouts operation, boys could earn merit badges.

Firsthand accounts, such as 10-year-old Howard Hughes’s letter to Beard in which he offers to return a merit badge because he ate candy, punctuate the clearly organized narrative. Beard associated “the glorious deeds of the pioneers” with ethics and patriotism, a notion Kahler echoes, writing: “Above all, Dan Beard was an American, steeped in American tradition and passing on the torch of American democracy…through his boys.” Despite this romanticism, Kahler’s extensive research allows readers to absorb the facts without necessarily subscribing to any moralistic assertions.

An appendix includes several articles written by Beard, a 1917 camp catalog, and bibliography.

Overall, this is an informative account of an influential Boy Scout leader’s impact on youth outdoor education in the early 20th century.