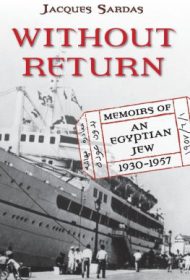 In this memoir, Jacques Sardas, an Egyptian Jew, traces his life from his poverty-stricken childhood in Egypt to his forced exodus in 1957 and his future without a homeland.

Sardas’ early years in Alexandria are full of the reasonably happy memories of childhood, even though the family of six is often hungry and his father is incapable of making a living. Just before Jacques’ 10th birthday, his mother dies unexpectedly. Grief-stricken, Jacques doesn’t re-gain his footing until the family moves to Cairo and he becomes a champion basketball player at his Jewish high school.

In 1957, as the political situation in Egypt deteriorates for Jews, Sardas, now married, decides to move to Brazil. When his visa is stamped, “Departure Definitive, without Return,” he sadly realizes that he may never see his home country again.

Sardas is a solid writer, although his straightforward narrative lacks the kind of dramatic tension and emotional connection that would lend it more power. When he literally outwits the Egyptian secret police in a frightening encounter, “I sighed with relief,” he says with typical understatement.

Sardas’ real strength, however, is placing his personal story in the context of the bigger picture so that readers gain a sense of Egypt’s history. Once Sardas departs Egypt, the last 50 pages change tenor and the narrative becomes more commonplace as it completes his personal story: how he succeeded in business through perseverance and hard work; how he re-connected with his Jewish faith—the sorts of lessons a parent wants to pass along to his children.

Sardas notes that he hopes his story will encourage others to likewise write down their own stories “and keep the torch of family history burning from generation to generation…”  Indeed, Without Return is an interesting read—one that would provide inspiration for those thinking of writing memoirs of their own.