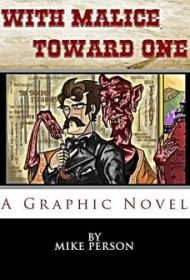 The assassination of Abraham Lincoln in 1865 remains a turning point in American history, a high-profile slaying that capped one of the most brutal and bloody conflicts the nation has ever seen. Author Mike Person avoids the complex historical fallout of the assassination in his vibrant graphic novel, With Malice Toward One, instead drilling down to the plain, unadorned facts leading up to the killing.

Beginning three days before the murder, Person sketches in words and images the major players in the conspiracy, primarily focusing on John Wilkes Booth, the former Shakespearean actor turned assassin bent on revenge for perceived war crimes by Lincoln.

Person kicks off his narration at Lincoln’s White House speech two days after the official Confederate surrender at Appomattox. He then follows Booth and his conspirators as they plan their crime; portrays the murder at Ford’s Theater; and ends with Booth’s flight, capture and execution. Person does his homework: The book includes a wealth of historical detail (the title is a play on Lincoln’s second inaugural address in which he refers to “malice toward none” and “charity for all”).

Person’s target audience is young readers. His text is simple and approachable; the drawings are colorful and creative; and the subject matter comes to life under his attentive hand. Each page of paneled illustrations has a complementary page of text summarizing the same facts. Person is careful to offer context and many opportunities for engagement. The back of the volume features a glossary, as well as classroom activities geared toward Civil War history.

The book’s main downfall involves copyediting issues. Considering that the book is designed as an approachable history text for children, there are far too many errors in simple punctuation and word usage.

This aside, the book offers a lively bridge into history for young readers, making this an exciting introduction to an important milestone in American history.