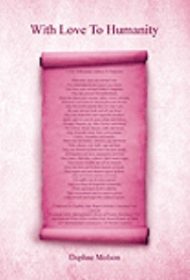 Daphne Molson’s collection of poetry and short prose pieces, With Love to Humanity, examines themes such as patriotism, the desirability of peace, the threatened environment, the meaning of family, and the inevitability of death. Her prose pieces also include a family history, a brief autobiography, and a portrait of Osama Bin Laden (this last, presumably, to provide background for poems about him and the 9/11 attacks).

Molson experiments with a variety of poetic forms, from the sonnet to the villanelle. Her adherence to form, however, often leads to strained rhymes with meaning that’s hard to discern; for example, “God give us wisdom/To indict corrugation/We have done ourself/To mend corruption.” Sometimes she fails entirely to translate her internal thoughts into something that makes sense: “I might be made dead/And arranged my death when/Her sex eggs group.”

Conversely, the poems that are clear generally contain few poetic devices, sounding much like prose: “Ask humanity/ When will the horrors of life/ Cease to greet us all?”

The most interesting of Molson’s prose pieces is her history of the Rogers side of her family, beginning with a retainer under William the Conqueror and including soldiers in the revolution and the French and Indian War. One outstanding anecdote is about an ancestor who met his demise when wearing a bearskin coat. “Ebenezer thought James was a bear and fired at him….”

Most of Molson’s prose, like her autobiography and her tribute to her friend, Lucien Verroken, however, are likely to interest only the author’s friends and family, and the convoluted syntax in many of the sections make them a wearisome read: “He was…the earner and buyer of my Carnation Evaporated milk, for my infant mouth, and screaming fit for it, did need comfort.”

While it’s clear that Molson cares passionately about important issues, such as the preservation of peace and the environment, her work requires substantial revision before it’s likely to attract most readers.