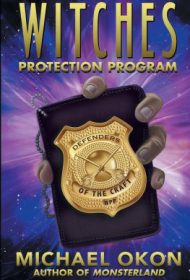 Michael Okon’s young adult novel introduces readers to a world in which witches are real, and the good ones sometimes need protection.

Witches Protection Program centers on just-disgraced federal agent, Wes Rockville. He has accidentally screwed up the transportation of a prisoner, and his boss—and father, Harris Rockville—gives him one more chance with a reassignment to the Down Under the Manhattan Bridge Overpass program, aka, DUMBO.

DUMBO, as Wes learns, is a black ops government program in which agents protect good witches, called Davinas, and investigate bad witches, known as the Willa, and sometimes even protect the Davinas from the Willa. Incredulous at first, Wes is drawn into his first case, protecting Junie ‘Baby Fat’ Meadows from her nefarious boss at Pendragon Cosmetics. Soon Wes is learning how to use vaporizers and trance lifters, and trying to stop the cosmetics company CEO and her minions from taking over the world.

Okon takes what could be a corny premise and weaves it almost magically into a believable world filled with both transcendent and silly characters. The dialogue is snappy and often humorous, and Wes easily engages readers. At one point, while watching an introductory film about witches, he quips, “Got any popcorn?” His new boss, Alastair, ignores him, as well as his repeated queries into whether the film’s actress is a famous star. It’s one amusing exchange of many.

Some readers, particularly in this political climate, might be offended by the idea of a manipulative female CEO villain who could be construed as a caricature of an angry feminist. That said, the good witches are strong female characters, and at some points, they rescue their rescuers.

Witches Protection Program is an action-packed story sure to delight teen fans of adventure and fantasy novels. Except for a few curse words and some lustful longing, the book would be appropriate for pre-teen readers as well.

Highly recommended for fans of the Harry Potter and Percy Jackson series, and of Jessica Day George’s Tuesdays at the Castle.