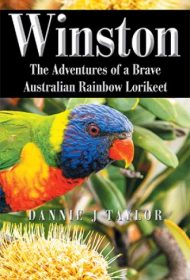 When a young rainbow lorikeet is adopted from a pet store by an older widow, its life takes a turn that leads to adventures both exciting and perilous in Dannie J. Taylor’s novella Winston.

As the book begins, the lorikeet’s breeder sells it to a pet store. After an unpromising beginning, in which the lorikeet bites the finger of a little boy who pokes his hand in the bird’s cage, “a dear old lady” known as Aunty adopts the lorikeet. Aunty settles on the name Winston and sets out to create a comfortable home for him.

Before long, Winston is perching on her shoulder and sleeping in the nape of her neck. He also manages to get into trouble as he takes his daily flight around the house, once nearly drowning in the toilet.

Then Aunty suffers a stroke. While she manages to call her friend Grace to care for Winston until she returns from the hospital, she is unable to walk following the stroke and can’t return home. Grace arranges for Aunty’s daughter to take in Winston, unaware that the daughter has no intention of honoring her commitment. And so, the next adventure in Winston’s life begins as he finds himself free for the first time.

The story is by turns charming (without being cute) and informative. It’s also realistic regarding the plight domestic animals face in the natural world.

The author is skilled at revealing the bird’s personality, such as when he develops the habit of “screaming” for attention, and the breeds’ characteristics, including the ability of dominant males to attack, even kill, other birds. He also creates enjoyable characters, including a merchant seaman with a big heart for animals.

While the ending feels a bit abrupt and the author’s note with it seems unnecessary, neither issue significantly weakens the story overall.

Winston is likely to appeal to a wide range of readers, but especially those who enjoy nature and birds.