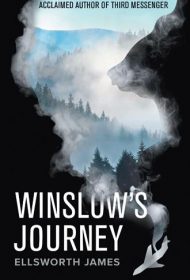 Winslow’s Journey is an exciting story of survival with a surprise ending.

Evan Winslow wakes up in the wilderness, the only survivor of a commercial plane crash. Although injured and bewildered, he’s determined to find his way home. On the journey, he encounters forest creatures and mysterious phenomena, discovers the secret behind one of the greatest unsolved crimes, and fights for his life against a dangerous criminal. Meanwhile, Evan’s wife Sarah experiences her own journey as she waits for news and grapples with the possibility of living without him, as well as dealing with her bi-polar disorder.

The author builds the suspense and uncertainty from the start, as Evan imagines his body flying through the air, only to realize he’s actually falling. He regains consciousness after the crash “embedded in a shallow crater,” wracked with pain.

Sarah’s experience is just as dramatic, although more internal. As finding Evan grows ever more unlikely, she struggles between holding out hope and trying to “move on.” With the help of her friends Marcie and Rose, the pilot’s wife, she begins to handle the self-destructive behavior that threatened her marriage and works towards her own future.

The book is grounded in realistic details. For example, the first chapter authentically describes an air traffic controller’s procedure for following Evan’s plane from takeoff until it’s handed off to the next Air Control Center. And Evan, a therapist, remembers the skills he learned growing up poor in coal country, such as hunting animals, building fires and making solar compasses.

Even Evan’s more unexplained, fantastical experiences, such as seeing what he believes to be Bigfoot and a huge alien spaceship, feel believable, albeit sometimes unnecessary. They appear infrequently, however, and there are clues dropped throughout the story that help explain the sightings. The heartbreaking yet powerful ending reveals everything.

With a compelling plot, engaging characters, and an easy style, Winslow’s Journey offers an adventure readers will enjoy.