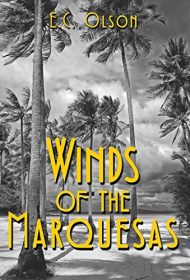 Two standup families from the Florida Keys are thrust into danger after being unwittingly swept up in a World War II-era global conspiracy involving prominent industrialists, crooked politicians, the Mafia and the Nazis in this elaborate, detailed and absorbing epic novel of historical fiction.

In the grand style of James Michener, the lengthy drama is built around true, documented circumstances that occurred during and after the war, when shadowy traitorous war profiteers plotted to rule the post-war world through collusions around the globe. E.C. Olson, a Florida native and historian, ecologist and explorer, spent 27 years conducting oral histories and deep research to write the book.

Throughout the story, he interweaves fiction with compelling facts. In chapter notes at book’s end, he cites verifiable references indicating which characters were real and which events really happened. The result is a complex story that engages readers as it enlightens (and sometimes frightens) with its great detail. The author presents information on multiple true characters, including Ernest Hemingway and mobster Meyer Lansky; Fidel Castro’s early political stirrings; once-hidden details about German U-boats lurking off the Keys and sinking American ships, and so much more. The author also offers vivid descriptions of the unique flora (for example, “giant gumbo-limbo trees”) and fauna of the South Pacific area.

Olson is adept at drawing sympathetic characters and capturing the natives’ colorful dialect (example: “See you ta-rect-ly”). He is equally skilled at developing imaginative, tension-infused situations while illuminating actual history.

This vivid story clearly illuminates the grave danger America was in from 1943-47 due to secretive acts by big names, from DuPont and J.P. Morgan to William Randolph Hearst. It’s a standout novel that should draw wide appeal among those who savor sweeping sagas.

Note: The Star designation is given with the acknowledgement that a few minor spelling and punctuation errors remain, as well as one glaring factual error: a reference to the Zane Grey book Riders of the Purple Sage, which the author calls “Riders of the Purple Haze.”