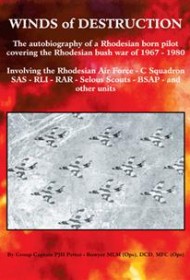 For most people in the U.S., the story of Rhodesia was pretty cut and dried. In the ’60s and ’70s, the white minority government did everything it could to keep the country out of the hands of black nationalists. News of military excursions into neighboring countries, assassination attempts on the lives of opposition leaders, and the defiance of Western sanctions were all part of the picture of a former British colony desperately trying to hang onto power.

But Peter John Hornby Petter-Bowyer has written a fascinating book that tells the story that most Westerners have not heard. As a member of the Rhodesian Air Force, Petter-Bowyer participated in the fight against those trying to unseat the white government. By the time he left the military in the early ’80s, he had risen to the rank of group captain and had been involved in many of the major operations against the Zimbabwe African People’s Union and the Zimbabwe African National Liberation Army, two of the leading rebel groups. He had also been part of the planning of operations, and even more interesting, in the development of some of the weapons — some of them rather nasty — that were used.

In Winds of Destruction, Petter-Bowyer takes us through his distinguished career up to the defeat of white rule in 1980, when Rhodesia became Zimbabwe. A massive 600 pages, the book at times gets bogged down in minutiae and too-detailed accounts of, for example, weaponry or other highly technical matters. There are also typos. But these flaws are outweighed by the positives. Though hardly neutral on the issues and some of the personalities involved, the author tells wonderful stories. His account is incredibly detailed and accompanied by numerous photographs of those mentioned, as well as the various aircraft discussed. The book also includes a thorough index and useful glossary.

Anyone with an interest in African or military history will learn from Petter-Bowyer’s excellent, thorough recounting of his country’s struggles during the 13-year bush wars. Even those with only a passing interest or little exposure to this struggle — and it was an important one — can benefit from this book.