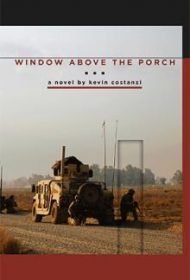 Kevin Costanzi’s novel, Window Above the Porch, is centered on a hostage rescue situation in Baghdad in early January of 2005. Over a 24-hour timeframe, the incentives for the rooted conflict involving soldiers and insurgents is fervently explored from a mix of American, Iraqi, and third party perspectives.

Against a harsh and volatile sandstorm backdrop, a group of insurgents led by a Filipino contractor are tasked with setting an IED in an area labeled “The Green Zone.” They encounter a more radical group led by the notorious Arab Qasem, involved in the same mission. Meanwhile, the joint American-Iraqi unit called the Crisis Reaction Force is being sent into the same area for a hostage rescue not normally in the scope of their duties. Tensions build as these opposing forces prepare for assault, each considering the ultimate possibility of injury, casualty, and failure.

Although this is a work of fiction, Costanzi’s experience as a former US Army Infantry and Special Forces officer brings the story a keen sense of authenticity. Whether describing the raging weather conditions (“a dry tempest with a hurricane’s intentions …”) or the harrowing results of a captive’s beating (“Livid bruising … nose squashed in pulpy chaos … wrecks of blackened ears” that leached amber serums), Costanzi paints a vivid picture.

Unfortunately, the author’s wordy and expansive writing style also brings drawbacks. The narrative is filled with a steady influx of war zone intricacies and mission details that bog down the story. And while Costanzo balances the action by delving into the thoughts and motivations of key characters, their varying perspectives can be confusing, as it’s sometimes unclear who is speaking. These issues might deter some readers.

Still, Costanzi’s characters are well-developed, and the story’s tensions appropriately build on the sides of both captors and rescuers, creating a tale most likely to interest those drawn to such difficult and harsh subject matter.