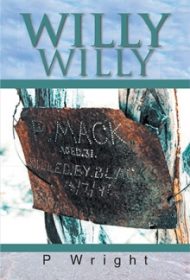 Willy Willy, by P. Wright is an unorthodox and compelling novel about love, transformation, and grief, set in the 1970s.

Willy Mills, an Australian geologist is nearly killed by heat stroke at the site of an infamous historical atrocity, leaving him with residual neurological damage. As a way to start over and possibly attend graduate school, he flies to Sweden, where his friend lives. There, he meets Svea Bergstrom, a tempestuous valkyrie of a woman who developed an audacious personality in reaction to growing up with a conspicuous birthmark. The two embark on a whirlwind, somewhat secretive romance, only to have it interrupted by a series of tragedies that echo through the lives of everyone around them.

Willy Willy requires some adjustment by readers. Wright’s prose can be Norse-tinged and ethereal in one passage, a sprawling Joycean stream of consciousness in the next. He writes every character in specific dialect and largely eschews dialogue tags, letting the distinct voices speak for themselves. Moreover, he has a tendency to shift from third person to first within the same paragraph to indicate an interior monologue (without the convention of italics). Considering all that, it’s impressive that these literary experiments prove successful.

Wright masterfully conveys the setting, emotion, and personality of characters while avoiding lengthy descriptions and cliches. He favors an organic approach without too much structure. For readers, as for Willy himself, it feels as if one has jettisoned the tools of navigation in favor of drifting toward whatever shore might appear on the horizon.

This method’s one deficiency is in the final act, where Willy and Svea’s tragedies resonate in their loved ones’ lives. What at first is a powerful epilogue to a shocking event produces diminishing returns and the author seems to be trying too hard to wring significance from it.

Overall, though, Willy Willy is driven by exceptional dialogue and a genuine poetic sensibility. Readers will find it a challenging, thought-provoking story.