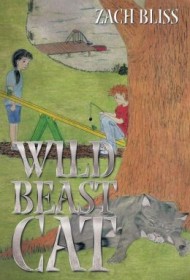 The story begins as Chris’ older brother, Jack, torments him by telling him frightening stories about a wild animal known as the “beast cat.” The creature allegedly has run feral for ten years, during which time he has mutated, developing a sixth toe on each paw and becoming vicious and massive. And the beast cat lives at Lake Frio, where the boys’ family is going on vacation.

Having arrived at Lake Frio, Chris stops by a convenience store and meets “Old Man Stick” and a girl named Jesse, whom Old Man Stick refers to as his grandson’s sister. (There is no explanation for that turn of phrase, and the family connection never resurfaces.) Chris and Jesse set out together to find the beast cat, crossing paths with a cruel animal control officer along the way. At the story’s end, Chris and Jesse learn about Old Man Stick’s connection to the beast cat (and to writer Ernest Hemingway) and the guilty secret about the animal that Old Man Stick and his sister have carried with them.

Wild Beast Cat sits firmly in the tradition of chapter books like the Boxcar Children series: stories that feature intrepid young people investigating unexplained occurrences. And Suzanne Whitson George’s black and white illustrations are well-suited to the book’s target demographic. But, largely because of its brevity, the story never gains momentum or a sustained sense of real danger or conflict. The characters and setting are not developed enough for readers to feel that much is at stake. For instance, the reader never even learns how old Chris and Jesse are.

As a result, the book suffers greatly. With a bit more meat on its structural bones, this could be a much more compelling story.