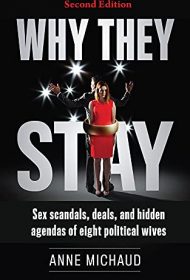 Anne Michaud’s Why They Stay is a solid, dishy book about seven American political wives and one Brit who stood by their husbands despite their scandalous behavior.

Overall, it appeals to our voyeurism, but what elevates this above tabloid fare is Michaud’s creation of an archetypal, loyal political wife she dubs the “White Queen.” The White Queen stays because it serves her interests. Michaud evaluates each of her subjects for White Queen traits such as caretaker, desire to build a legacy, and patriotism.

It’s a clever tool easily applied to Hillary Clinton and Melania Trump. Hillary was a leader in her own right before she met Bill and has remained married, in part, due to their shared patriotic enthusiasm for public service. Melania was a disciplined model, but she latched onto Trump rather than other wealthy men because he offered a larger narrative of success, a legacy for herself and her children.

For her facts, Michaud cites newspaper and magazine articles, books, and trustworthy online sources, but few original interviews. Clearly this award-winning political journalist who wrote for the Wall Street Journal also has much experience to inform her analysis.

In all of these cases, Michaud argues the women knew about their husbands’ philandering and probably negotiated terms, such as their husband’s discretion. But these men’s discretion lapsed, often with little career consequences. Michaud concludes by acknowledging our patriarchal culture and its confounding messages, such as “men will be men.” Americans seem to think their leaders can be serial cheaters, but women with any sense should dump their cheating men. No wonder these graceful women, pilloried for difficult personal choices, are so fascinating.

While not exactly groundbreaking, Michaud’s analysis of them offers a satisfying diversion for anyone interested in the topic.