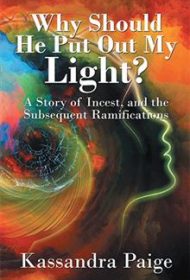 In this compelling true-life story, Kassandra Paige shares an in-depth personal account of a childhood darkened by cruelty and incest, and adult years marred by the consequences of her thwarted upbringing.

Growing up on a farm-let in New South Wales, Australia, Paige was drawn to country life and the beauty of the outdoors. Unfortunately, her existence was shadowed by recurring nightmares, a near-fatal accident, and sexual abuse incurred at the hands of her father. Threats of being jailed, beaten, and never allowed to see her mother, scared Paige into keeping this “special secret.” Thirty years passed before she confessed the abuse to her mother.

Clearly she chose not to dwell on the horrors. Through her love of the classic Pollyanna children’s books, Paige adopted the positivity of the literary heroine.

In this fluid, detailed memoir where names have been changed for self-protection, Paige focuses on her dysfunctional home life, financial struggles, failed marriages, relocations, and reconnecting with a childhood friend. She delivers this first-person narrative in an easy, conversational tone, often directly addressing readers with exclamatory or rhetorical comments. When contemplating not sticking up for herself, for example, she notes:  “I’m trying to change that!”

Music and performance proved a saving grace for Paige, although her controlling husband’s Jekyll and Hyde personality could often zap the joy from such activities. As a prayerful Christian, she often felt angels watching out for her. Ever the optimist, Paige manages to inject humor into the heartache. When discovering her second husband’s infidelities with two women named Rung, the author jokes:  “It seems two Rungs don’t make a right!”

Beneath dire circumstances, this exacting story spins on a positive note. While some may view Paige’s forgiving nature as an unrealistic response to unconscionable behaviors, these open and honest revelations seem primarily intended as encouragement for those looking to move forward from a negative past. On that note,  this book succeeds.