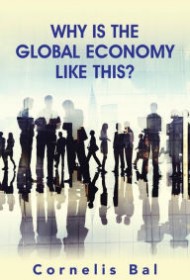 Cornelis Bal takes a thoughtful, big-picture approach to analyzing the present and future economies of the world in his short book Why is the Global Economy Like This?

Bal’s central premise is that the current world economy is based on rewards paid to workers in exchange for their skills and labor, but an increasing amount of the world population subsists on payments (in the form of taxes) transferred from the earnings of workers to non-workers. This, in turn, leads to resentment by the pool of tax-paying workers, a pool which Bal argues is growing smaller as mechanization eliminates the needs for many traditional occupations. It also leads to unrest among those who want jobs but can’t get them. As Bal writes: “The Arab Spring was not about the ruling regime; it was about jobs—or, more precisely, the lack of jobs —and about citizens having their backs against the wall.”

Given this fundamental problem, Bal proposes that a new economic system based on payments for one’s contribution to society as a whole—not just in a commercial arena—would be more successful.

Bal’s ideas are provocative, but by his own admission he lacks specifics when it comes to implementing his plan and realizing his somewhat hazy vision of the future. He points out, for example, that mothers make a major contribution to society through child-rearing, but while paying mothers is an interesting concept, Bal doesn’t address the fact that such payments might encourage even higher population growth—the latter being one of the root causes of the problem of “not enough jobs.” Such omissions seriously detract from his thesis.

Bal’s concepts are grand, such as abandoning money in its present form, but with so few of his ideas fleshed out, Why is the Global Economy Like This? is more of a jumping-off point for those interested in economic theory than it is a useful blueprint for the future.