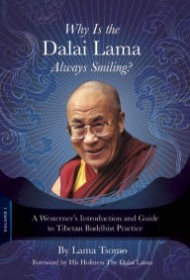 Lama Tsomo, born Linda Pritzker, begins by describing her depressing childhood and 20-year search for meaning before meeting the man she calls her “Root Lama”: Tulku Sangak Rinpoche, the reincarnated lama of a spiritual line established in the ninth century. His teenage imprisonment and decade of hard labor in Nepal led to transformational lessons in karmic debt and compassion.

After two decades of study with him, Tsomo was ordained as one of the few American female Tibetan Buddhist lamas and considers herself a bridge between Western students and the wisdom Rinpoche carries. She now helps him plan and build a retreat center near Hot Springs, Montana, while spreading his brand of Vajrayana Buddhism.

Tsomo recounts Rinpoche’s life story and offers her dharma lessons about the Buddha’s teachings in clean, clear prose. Her descriptions of the meditations for tranquility and compassion are also inspirational.

As a teacher, Tsomo’s style has been called “lively,” and “approachable,” but in print, that informality can sometimes be problematic. She too often interrupts the flow with personal stories, refers to a traditional breathing exercise as “The Tibetan Nose Blow,” and overuses exclamation points. At times, Tsomo’s book has an evangelical tone, which can also be troubling. She frequently plugs her upcoming books and the retreat center, and often notes the importance of studying with a qualified teacher—such as herself.

Tsomo answers the title question by noting that the Dalai Lama smiles because he has found joy in knowing that we are not separate beings and because he starts each day with meditation, visiting “that great ocean of compassionate awareness.” Tsomo delivers the same kind of joy in these pages. Readers willing to overlook the book’s missteps will appreciate her offering.