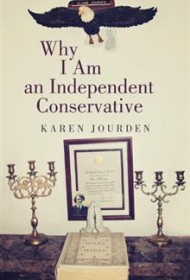 Karen Jourden wants to educate readers about how politicians are taking the country in the wrong direction. Here, she offers an overview of U.S. history, including a chapter about the presidents, interspersed with Bible quotes and her views on everything from the Constitution to slavery to healthcare reform.

Angry about what she sees as “liberals’“ efforts to erase our country’s Christian principles, she repeatedly urges us to read and learn from history. But this book isn’t likely to leave readers better informed, as it is filled with bitter polemic at the expense of serious scholarship. A typical insight: “If we keep going toward liberalism, which leads to Socialism, which is a step toward Communism, we will all be slaves to the government.”

Fear and outrage seem to motivate the author’s interest in history and current events. But her research is dominated by blogs, YouTube videos and Wikipedia: Scores of lengthy website addresses are cited as references and in footnotes, as is the 1982 edition of Encyclopedia Britannica, among other sources.

Jourden mistrusts all politicians, but can’t really be considered “independent,” as she uses “liberal” like an epithet on nearly every page. Meanwhile, her disjointedly written tome is replete with inaccuracies (for example, the ACLU was not founded in the late 1800s; Mexicans do not celebrate May 5 as the day they want to take land back from the U.S.; Obama does not claim to be a descendent of slaves; Obama did not say that the UN takes precedence over our Constitution — and many more). Readers will find relief from the author’s heated opinions only by the occasional inadvertently amusing statement such as, “[Pre-marital sex] comes from the pot-smoking, hippie, liberals’ free love in schools and politics today.”

Jourden may believe she’s exposing “truths” in this book, but only those who already hold the radical views she espouses here will be interested in this title.