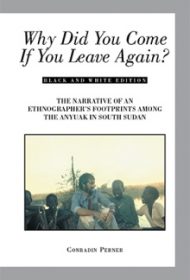 Ethnography at its core is the anthropological study of a people by immersive participation in their culture. The ethnographer’s observational work records the everyday details of the study’s subjects—but what of the ethnographer him/herself?

Conradin Perner produced a definitive series on the Anuyak people of the South Sudan, and, having published that series, embarked on his own memoir in Why Did You Come If You Leave Again? This thorough account weighs in at a hefty 788 pages and covers all aspects of Perner’s five-year journey, from his initial decision to study these people to his everyday ups and downs in multiple trips to the area, to chronicles of their lives and building a dictionary of their language, to his eventual return to his home in Switzerland.

The Anuyak tribal lands are flat, grassy plains in the Gambella region of the South Sudan and the western Ethiopian high country in East Africa. Considered “lowlanders,” the Anuyak are basically herdsman and subsistence farmers. Each village has its own king and sub-chief to administrate the village. The 21st century Anuyak continue to suffer a lack of basic access to resources such as water, health care, food and education. Otalo, the village that became home to Perner, was a typically communal one.

Perner is a meticulous journal-keeper, and his book is filled with interesting anecdotes. (Squeamish readers should note that he doesn’t omit any detail, including his many intestinal ravages and descriptions of tribal rituals of “blessings” using spittle.) In these pages, he is able to speculate subjectively on topics that were inappropriate in his scholarly monographs. For example, he comments upon the motives behind the actions of the imperious tribal king and often conjectures on the king’s desire to hold on to power in the tribe.

For those who enjoy learning about the in-depth activities of anthropological study, this book is a wealth of information. Readers learn the tribulations not just of daily living in a third world environment, but the actual trials of getting to that environment to begin with. Perner, dubbed “Kwacakworo” (bull with leopard-like spots) by the Anuyak, writes clearly and has the ability to turn a lyrical phrase, as in: “…my personal life was still flickering somewhere else, its shy flame well protected by love.”… and “I moved through the days and the nights as if I was wind, a flying feather, a swaying bow, a changing light.”

Any journal of how an anthropological study was recorded will be lengthy, and this one is no exception. While its copious detail will likely deter a general audience, it will interest those who enjoy this type of study. Certainly, it will be appreciated by anyone who has read Perner’s monographs or any other studies of the South Sudan region.