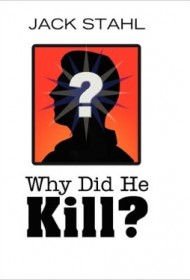 Jack Stahl uses the case of Klaus Schmitt, a depraved Viennese finance heir, to pose his novel’s title question. Klaus’ successful father, Conrad, plans to groom him for a career as prestigious as his own. Klaus, however, fails to meet his father’s expectations and, as a teenager, robs and kills a man for thrills. Klaus’ mother, Meta, is determined to rehabilitate him, but her idea of rehabilitation involves getting drunk, tying Klaus up naked and whipping him for days until he promises to change.

To all appearances, Klaus reforms and becomes a model citizen, working in the human resources department of Daimler/Mercedes. But in fact, he becomes a serial killer, first dispatching his family, then strangling women and violating them with liquor bottles. Although some members of the police force suspect him, Klaus manages to avoid leaving any incriminating evidence. That changes when one of his intended victims, a Turkish immigrant named Eshal Akyildiz, escapes.

Stahl’s exploration of a twisted mind, in particular the story’s sexual and Oedipal themes, bears a resemblance to the early works of James Ellroy (Because the Night, Killer on the Road, etc.). But the writing lacks Ellroy’s narrative punch. It is often choppy, clumsy and riddled with clichés (“He was the spider, and they were the flies unwittingly walking into his evil web”). The reader never gets deep enough into Klaus’ mind to get involved in his story. It is refreshing to see a female character who fights back against and outwits her tormentor instead of waiting for rescue, but Eshal appears too late in the story to salvage it.