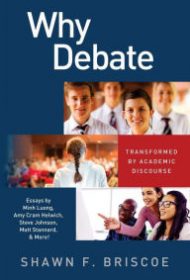 Why Debate? Transformed by Academic Discourse is actually a love story revolving around the author’s great passion: academic debate.

Shawn Briscoe, program director of the St. Louis Urban Debate League, has assembled a collection of essays divided into four major sections and written largely by his former teammates, students, and colleagues. They address the importance of academic debate in the authors’ personal and professional lives, their intellectual growth and their evolving sense of civic responsibility.

The best of these essays clearly and compellingly distill the benefits of debate. In “Why I Fell In Love With Debate,” for example, Briscoe notes that he gained “the ability to see the middle ground and empathize with another’s perspective,” making him a better leader. In “Why We Debate: A Corporate Leadership Perspective,” Luke Savoie credits debate for teaching him how to “preempt [his] competitor’s arguments,” steer the conversations in advantageous ways, think on his feet and more—all skills he relies on in his corporate executive position.

The most thought-provoking essays link debate to larger social issues, including the volume’s most affecting piece, Richard Omoniyi-Shoyoola’s “The Speaker in the Blue Agbada: What Debate is for Me.” Here, the author discusses how debate helped him to both connect with, and express, his Nigerian heritage.

Some practitioners of debate—particularly those who teach the subject on the college level—may blanch at the overwhelmingly positive nature of this book. Unlike what is taught in debate, there’s no counter-argument here, no essay that challenges the usefulness of the endeavor. Some lively disagreement would have animated the work and made it more interesting to those outside the debate community. Briscoe doesn’t offer a balanced examination so much as a celebration of the subject.

As such, this book will appeal mostly to those who have debated and appreciated the experience. For these readers, Why Debate? underscores the value in the endeavor and will place them happily among friends.