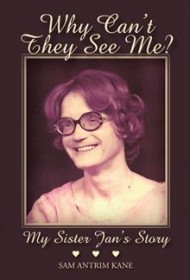 Author Sam Antrim Kane’s sister, Jan, was born with familial dysautonomia, a rare genetic neurological condition that left her with limited vision, an unsteady gait that led to frequent accidents and injuries, and the inability to feel pain, among other symptoms.

During her 52 years of life, Jan battled not only the physical manifestations of her condition but also its emotional aspects. She had to contend with bullying and ridicule because of her physical differences and to endure the limitations placed on her by society and even her own family. She struggled to fit in and make friends; as a result, in her adult years she turned to drinking for solace and found love in all the wrong places.

Kane pays homage to Jan with this memoir, which reads like a belated apology from a brother to his older sister, whom he shunned while they were in their teens. He recalls passing her at their high school and hearing her yell, “How come you never talk to me or say hi? Can’t you see me?” He admits that it hurt and that he wanted to hug her, but instead he went on his way because he was ashamed of his sister – and of himself.

Above all else, Kane strives to deliver the message that even those who are different deserve to be seen and given the chance to reach their full potential. By telling simple stories from his childhood and watching his sister achieve more than many people – including her own father – ever thought she would, Kane achieves this goal.

While the writing can be simplistic and unadorned, Kane’s an engaging storyteller, and even those who haven’t been touched by familial dysautonomia will find Why Can’t They See Me? of interest.