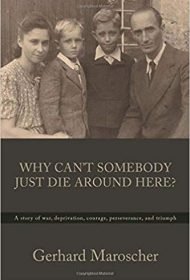 Gerhard Maroscher’s Why Can’t Somebody Just Die Around Here? is a compelling recollection of the turbulent WWII era, told through the experiences of one Romanian family.

Living in Romania during the start of the war, the Maroschers led a serene existence—until mid-1944 when Maroscher’s father, Gustav, was called up for training in preparation for combat against the Russians. By September 1944, the Russians had invaded Romania, and Maroscher’s mother, Helene, fled for Weimar, Germany with her two young sons. They would remain separated from Maroscher’s father until 1946.

Seeing America as their last hope, the family eventually emigrated, and their life in the U.S. consumes the book’s latter part.

Maroscher’s memoir offers a personal view of WWII’s devastation, while also providing historical context. Traces of humor balance the tension, such as when Maroscher’s brother encounters poison ivy in the U.S., having never seen the plant in Germany or Romania.

To his credit, the author portrays family members as realistically flawed; for example, out of desperation, Helene steals a large lantern, which they use as a stove, and Gustav’s quick temper proves trying to the family. Photographs, letter excerpts, and documents transport readers back in time, offering a closer, intimate look at life in those days.

Well-researched and written, this is an inspiring story of survival, courage, and tenaciousness. It proves that through determination, life can take a turn for the better.