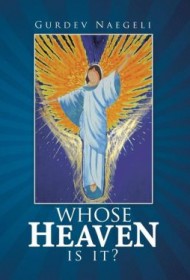 All great world religions have commonality; all are part of what author Gurdev Naegeli calls the “Spiritual Platform,” an inclusive base on which all faiths and beliefs can stand.

Whose Heaven Is It? concentrates on the teachings of the three great monotheisms, Judaism, Christianity and Islam, along with notable spiritual systems such as Hinduism, Taoism, Confucianism, and Buddhism. Each of these has a place on the Spiritual Platform, their similarities “more important than what differentiates them,” the author notes.

Gurdev Naegeli boldly compares various doctrines: ethical systems that include beliefs in reincarnation and karma, as well as those that propose that we live one life followed by God’s final judgment. His detailed elucidation of the mutual beliefs and shared histories of these doctrines demonstrates his fine-tuned knowledge. His awareness of religious distinctions is underscored in a later chapter by his unflinching commentary on the Arab-Israeli conflict and its relation to the Spiritual Platform. He suggests that mankind has yet to accomplish its spiritual purpose, and urges us to regard our collective progress as “the glass half full.”

Whose Heaven Is It?, written by a financier/musician who was raised in Malaysia and schooled in England, posits the intellectually intriguing possibility of worldwide multi-cultural, multi-religionist harmony. There is, however, one jarring element to this otherwise dynamic examination of spiritual systems: The final chapter is concerned solely with finance, its inclusion justified by the author with an assertion that “a culture of greed” has brought about “imbalance in our financial markets.” The reader who chooses this book for its spiritual guidance will likely balk at trying to absorb this dense, technical analysis of currency fluctuations and banking practices.

In general, though, Whose Heaven Is It? skillfully accomplishes what the author undoubtedly intended: It opens doors to further profound questions about spiritual doctrines and how they unite, rather than divide, us all.