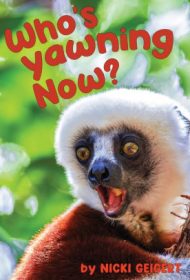 In this nonfiction picture book, young readers learn about different animals through an unusual lens: yawning.

Thirty-two animals are depicted in Who’s Yawning Now?, a book designed for both early and more advanced readers. The author includes popular species (impala, hippopotamus, etc.), as well as those less familiar (Tenrec of Madagascar). Each animal comes with a photograph of it yawning and two different texts, one for early readers, and another, longer description from the animal’s perspective (using first- or second-person prose, depending on the profile) for older readers.

The longer sections offer similar information, including comments about the animal’s diet, geographic footprint, physical description, and behavioral features. They are conversational and deliver fun tidbits (for example, the hippo informs readers that it relies on small fish to clean its teeth by eating mouth parasites and “leftover food bits” from between its teeth).

However, occasionally the text mentions challenging concepts, such as “civil unrest,” and a few comments that may lead to tough conversation, such as when the Axis Spotted Deer notes: “My family members have been moved to farms in Texas, and farms in Europe so that people can trophy shoot me for my beautiful antlers.”

The shorter text, which can be read alone, is succinct and offers a statement and question to engage the youngest readers, such as: “I am a tired Impala Ram. Do you yawn when you are tired and ready to take a nap?” While often engaging, these questions can also be repetitious, often commenting on how wide/big/huge the animal or reader’s mouth is. Additionally, in many of the pictures, the animals’ mouths aren’t open widely, so they don’t seem to actually be yawning. Finally, some of the words will be challenging for early readers (ex: “privileged” and “southeast coast”).

Despite such missteps, this book uses a simple concept to help children learn about and empathize with a wide variety of creatures and should hold appeal for young animal lovers.