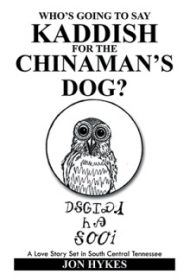 The early pages of this impressively original novel might well be called a “verbal still-life.”

In a featureless diner in a small Tennessee town, several characters are portrayed eating breakfast and drinking coffee, mostly in clusters of isolation, alone with their memories.  From there, the narrative shifts to the home of a bestselling author and becomes a psychological still-life, for he is gripped by writer’s cramp, frozen before a blank computer screen. Only after the stasis of these establishing scenes has played out does the book begin to move.

And move it does, at a great rate. First, the story introduces two damaged women bent on revenging a great wrong who, before long (and after savagely achieving their retribution), will turn into guardian angels, rescuing not only the blocked writer from his demons, but also a desperately wounded man mourning the death of his wife, who has been mutilated by a freight train, and the loss of his penis to Agent Orange and cancer.

All of this suggests this isn’t for those looking for an easy, straightforward plot. The story is crowded with tenuously linked episodes. It frequently focuses on basic bodily functions and includes violence of an almost offensive sort, as well as dark, humorous asides. Moreover, the ending is rushed and incomplete.

Yet it also offers big rewards. There’s a dark, Dickensian air to some scenes, and many of the juxtapositions of character and atmosphere recall the early Garcia Marquez. Additionally, the conclusion, however forced, is satisfyingly consistent with the book’s message: Those who persevere in the face of life’s infernos can emerge successfully after all. While not for all, this story should please anyone who delights in ambiguity, startling humor and well-written complexity in their fiction.