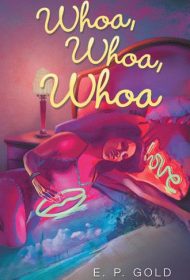 Sexual hijinks ensue—hardcore sexting, hotel sex, sex clubs, swingers’ parties, etc.—and soon Mummy realizes that her transformation into a “wildly sexual woman” has also made her more independent and courageous. She divorces her husband, takes an inheritance from a recently deceased parent, and relocates to Barbados, where her dream to open a restaurant in the Caribbean is realized. But when Barney disappears and the business begins struggling, Mummy must reevaluate her life once again.

While the memoir is certainly unabashedly candid and sexually charged, the chronicle of Gold’s quest for enlightenment is laid low by myriad narrative and craft shortcomings. There is very little focus on description, sexual tension, setting, character development, and so on, and at a slim 70 pages, the final product reads like a rough draft.

This coming-of-age (or, more aptly, of enlightenment) tale had the potential to be akin to Erica Jong’s Fear of Flying, a seminal portrayal of female sexuality and empowerment published in the ‘70s. Sadly, the many writing issues makes this a skeletal read, one undeniably sexy but poorly executed.