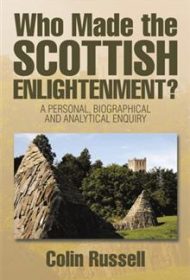 In this highly informative volume, a knowledgeable academician surveys the many significant personalities that forged the Scottish Enlightenment.

Author Colin Russell looks at the Scottish Enlightenment in terms of people. Unlike some other researchers of this period, he has set a rigid time frame, stating that the Enlightenment began in 1688, when the country became “increasingly sophisticated in a moderate theology, a sound footing in science, with a respect for philosophy and an engaging counterweight of romanticism.” The end, he asserts, came in 1832, when enfranchisement within Great Britain and other political reforms removed some of the spurs that provoked the Enlightenment. In general, Russell paints the era as a time when Scotland became a “learned nation.”

Among the persons highlighted are well-known literary figures such as Sir Walter Scott and Robert Burns; economic philosopher Adam Smith; steam engine inventor James Watts, and “wandering Scots” such as missionary David Livingstone and social idealist Robert Dale Owen, who founded a utopian commune in Indiana. Russell gives contextual biographical data for about 708 such “luminaries,” both male and female.

Each chapter examines a particular theme, such as philosophy, education, medicine, invention, even sports, through the accomplishments of the participants and links the bios in a fluid narrative. He also examines how the Scottish Enlightenment is being taught today.

The book is refreshingly well-organized and thorough and satisfies what Russell posits as the three principles of history writing: facts, context, and the perspective that comes with the passage of time. His work appears to be without bias, other than his choice of the principle actors, and he’s careful to apologize for any possible exclusions. One issue: the book lacks an index, which would have made it easier for readers to quickly access information on specific persons.

Overall, however, this work will be of interest to educators and anyone who seeks a basic, objective and inclusive overview of this slice of history.