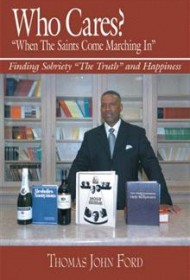 Thomas John Ford’s book Who Cares? “When the Saints Come Marching In” appears, at first glance, to be a redemption story about one man’s victory over alcoholism. However, the book soon veers off course onto a quirky and often puzzling exploration into questions about Christianity.

Ford’s narrative includes scant details of how he found God, kicked alcoholism, and redirected his life’s path away from self-destruction. But his life story is not the main focus of this book. The bulk of this short read focuses on Ford’s frank queries that challenge common perceptions of Christianity. He presents a host of questions, such as whether our souls live after we die, why the name of God seems to be missing from the Bible, and whether “perfect creatures in heaven, are waiting for a bunch of ‘sinners’ to come ‘marching In.” Ford’s natural humor often seems wielded as a wake-up call, aimed at pulling us out of the fog he calls “Church Brain Syndrome.”

Ford’s writing style is full of inference and implied meaning. As a result, his stance on the theological controversies he’s debating is often difficult to determine. The clarity of his arguments is hampered by poor grammar and punctuation problems that may prove fatal to the book’s success. One example: “If the universe is ten to fifteen billion years old as some physicist estimate. Then the angels in heave are at least that old.” As shown here, the writing often includes periods in the middle of complete thoughts. Coupled with the author’s use of shaky, undocumented historical facts, the writing issues create doubt about the author’s authority and present a confusing read. After a while, readers’ grace runs thin as they become exhausted trying to figure out what Ford intends to say.

No doubt Ford brings up thought-provoking ideas about how Christians perceive their faith, but his book needs a thorough polishing to be positively received by Christian audiences.