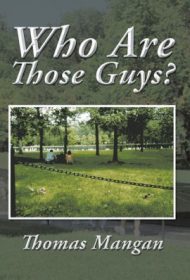 The title of Thomas Mangan’s book poses a question that countless people have asked upon visiting the Memorial Wall at the Vietnam Veterans Memorial in Washington. The wall itself speaks volumes, but unless one of the 58,000-plus names inscribed on it belongs to a relative, friend or fellow service-member, a person may be left wondering about these Americans who died or were lost in Southeast Asia.

Mangan, of Brockport, N.Y., considered the question when his son was going to visit the wall on a class trip. The author gave the boy a note about one of his friends whose name was on the wall. The boy and his classmates found the soldier’s name, adding meaning to their visit.

Mangan, a freelance writer with an interest in veterans affairs, began compiling stories behind the names on the wall. Over the years, he expanded this collection, using books, magazine articles, news reports and interviews with family members and those who served with the deceased.

The 367 profiles offered here range from a few sentences to several pages. Accounts of the soldiers’ deaths are included when possible, and Mangan lists the location of the soldier’s name on the wall. Other details hammer home the loss. Wrote one mother about her son: “He loved dancing and music; he was an avid fan of stock-car racing. . . . He was sent to Chu Chi, Vietnam. He lost his life there on August 30, 1967, at the age of 20. His father, Francis, died of a heart attack on hearing the sad news.”

If there’s a quibble, it’s that some of Mangan’s profiles are just bare-bones accounts that don’t go much beyond name, birth date and date of death. Compared to the many longer, richer accounts, these brief summaries seem incomplete.

Nonetheless, this book is a notable achievement. It serves both as history and an invaluable resource for anyone visiting the wall and willing to do a little homework.