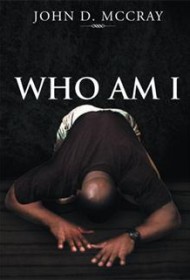 When Who am I opens, Brent Edward Miles, the protagonist, has just lost his partner in a car accident and his mother to breast cancer. Having been informed by his mother shortly before her death that she wasn’t his biological mother– she tells him that he was actually the product of his father’s affair with another woman–he moves to New York in search of his birth mother.

Brent quickly manages to land a high-level job in his birth mother’s company, slowly getting to know her over time without telling her he’s her son. Meanwhile, despite being gay, Brent finds himself unexpectedly attracted to a young, churchgoing woman named Renee, and is thrown for a loop when she tells him she’s pregnant with his child.

The story has more twists and turns than a thriller novel, and memorable and wacky characters lend color to the already-engrossing and well-arched plot. Yet the prose could use a bit of polishing due to sometimes stilted dialogue (“Well, I was born in Little Rock, Arkansas, where I grew up, and then I went off to college at Morehouse in Atlanta, Georgia. I received my bachelor’s degree in Accounting…”) and occasional grammatical errors.

Who am I is probably not for everybody: some may be put off by the book’s religious overtones, while religious folks might blanch at the novel’s several explicit sex scenes. Also, Renee encourages Brent to allow God to help him “turn away” from being gay—a theme that will undoubtedly offend many. However, gay characters and relationships are presented with enough complexity that readers are left with some ambiguity as to how the author himself feels on this issue.

Overall, Who am I is a suspenseful read by an author who is clearly a gifted and imaginative storyteller, but readers will need to decide for themselves if its content is likely to please or offend before picking up this book.