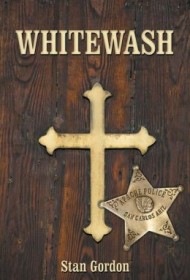 Set in the Southwest in 1935, this well-researched novel teems with melodrama.

When four Catholic missionaries are kidnapped from a church-run hellhole called St. Michael’s Indian Boarding School, author Stan Gordon throws readers into a cesspool of racism, hypocrisy, sex abuse, murder, corruption and conspiracy that spreads over the desert and all the way to Washington, D.C. and the Vatican.

It takes the combined efforts of two spotless heroes—a white FBI agent and a noble Apache police chief—to set things straight. Thirsty for bloody justice? You’ll find it here: In a climactic knife fight, the Native-American avenger manages to slash both achilles’ tendons belonging to the book’s most odious villain.

Author Gordon acquaints us well with the Depression-era malefactions of Church and State toward the Apaches, which are scarcely exaggerated here. “We’re going to wash the Indian out of you,” the school’s cruel headmaster shouts at the children. A fat nun calls them “heathens.” A drunken priest named Muldoon rapes an innocent teenager. And a thuggish Bureau of Indian Affairs superintendent named—what else?—-Callis, wallows in bribes, beatings and butchery.

Gordon’s muckraking spirit honors the great tradition of Frank Norris, Upton Sinclair and their literary descendants, but his susceptibility to caricature weakens the narrative. His bad guys are invariably alcoholic, bulldog-faced cowards, his heroes a bit too tireless, chiseled and virtuous to be real. As for the irresistible native women of the Southwest, they all seem to have alluring cleavage, “sumptuous dark skin” and “beautiful antelope eyes.” The writer also stumbles over simile and metaphor: “Her voice hung in the still air,” he writes, “like an insect stuck on flypaper, unable to free itself.”

Still, Whitewash is an exciting read that stirs the conscience. With some shading of plot and character, it would also make a terrific movie.