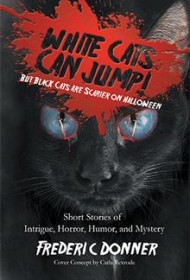 If the goal of horror writers is to make readers feel unsettled, Frederic Donner achieves this in his anthology, White Cats Can Jump! But Black Cats are Scarier on Halloween, a collection that delivers best when it comes to horror, while the elements of intrigue, humor, and mystery mentioned in the subtitle are more fleeting.

The author employs shifting points of view to good effect in “Once Upon a Diary,” in which journal entries by six different people show how strangers – and even a pet – become linked when a serial killer strikes. Pets also play key roles in “All Dogs Go to Heaven,” in which a cat and dog that witness a murder remain loyal, literally to the end.

In the ironically titled short-short story, “Love,” narrated by a well-dressed stalker, Donner proves he can deliver a creepy feeling in the space of just two and a half pages. Another disturbing — and disturbed — narrator is the pro-ballplayer with a taste for taxidermy in “I Will Have You, My Love.” The story is no less chilling for its predictability, as the ballplayer targets a woman to covet in the same manner as he does the pets he has preserved forever.

Donner’s horror is competently written. What keeps it from being superlative is his overemphasis on his disturbed protagonists at the expense of their victims. It takes sympathetic characters in jeopardy — characters readers really care about — to create memorable horror. Donner can deliver such a character, as we see in “G-String,” which opens a window on the sex work and love life of an exotic dancer and is more intriguing for the fact that it doesn’t depend on a horror element to draw the reader in. More characters like this in his horror pieces would be a plus.

As is, the book is not a major standout in the genre, but it is likely to satisfy those looking for another voice in horror fiction.