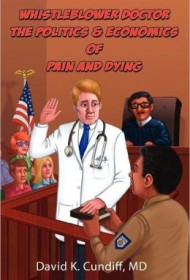 Dr. Cundiff’s recounting of his work at the Los Angeles County Department of Health and the University of Southern California Medical Center from 1979 to 1998 focuses on his experiences dealing with hospice care and the terminally ill and emphasizes his ongoing attempts to reform care for those in pain and/or terminally ill. These patients, in the words of the author, served as “cash cows” for the hospital system the author worked for as they, for the most part, had state insurance with proscribed care that offered huge paydays. The advances that Dr. Cundiff and his fellow caregivers offered through pain management and palliative care led to fewer reimbursable patient days, and, thus, less revenue for the hospital. Cundiff posits that it was this reduced revenue for the hospital, and his attempts to evangelize the reforms he’d introduced, that caused him to lose his job in the hospital and later his medical license.

While the jury remains out on Dr. Cundiff’s medical status until resolution of his licensing case in May, 2011, the verdict is clearer with regard to his ability to write his story in a compelling way. Whistleblower Doctor has little to recommend it to anyone not thoroughly versed in medicine, and even medical professionals will find it difficult to follow. The writing is jarringly disjointed and filled with footnotes. There is little narrative structure, the book continually refers to the author’s own case and, unfortunately, does not do enough to explain the broader implications of Dr. Cundiff’s experiences to warrant the subtitle, “The Politics and Economics of Pain and Dying,” and, thus, a wide readership.