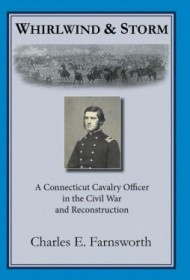 Much is known about the Civil War, but it is always a special privilege to delve inside the thoughts, passions and driving forces of one who served as a leader during the conflict. This captivating biography of a Connecticut cavalryman, penned by his great grandson, does just that with skill and flair, exploring not only the young man’s war experiences but his business adventures, loves and personal struggles.

The author, a lawyer and former Marine officer, had oft heard about his relative’s heroics. He felt driven to pen the book after sifting through a special box containing an intimately detailed personal diary and 135 letters written by Lieutenant Colonel Charles (Charlie) Farnsworth to his family. The book’s tale begins in 1856, when an ambitious and sometimes reckless 20-year-old Charlie begins pursuing potential fortune through various ventures, including prospecting out West.

After war breaks out in 1861, he volunteers for military duty in the Union Army, rising through the ranks. The book records his emotional pain and concerns for fellow soldiers during capture and imprisonment, offering intriguing details, such as hollowed-out cakes sent by relatives that smuggled in letters and gold coins. Charlie also invents a code (since broken) to secretly express his love for another although he is engaged. His post-war Reconstruction-era business ventures in Georgia also are detailed before his untimely death.

The book’s first part is a short, impartially written and straightforward narrative that melds Charlie’s words with historic detail to recreate the chronology of the young man’s life. This is followed by Charlie’s vividly written, entertaining and intimate letters, as well as his diary notations and various documents, accompanied by the author’s brief, explanatory comments. The book is professionally assembled, with a table of contents, bibliography, index to texts and comments, and a list of illustrations.

Overall, this rich biography not only fascinates, it holds important historic documentation that will be of interest to anyone delving into the Civil War era.