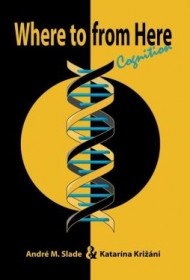 Andre M. Slade has a lot on his mind. In Where to From Here, he talks about (and this is just a short list) overpopulation, pollution, capitalism, global warming, prisons, race relations, health and diet, vitamins, internet dating, sex, numerology, and Christianity — all in an effort to wake readers up from their collective spiritual sleep and help them live deeper and more meaningful lives.

Along the way, he asks a number of thought-provoking questions: Why do we act the way we do? Why do we focus on small annoyances and ignore huge problems when it comes to society and culture? Where is the world heading in the 21st century and is there anything we can do to alter its trajectory in a positive way?

Slade is an energetic thinker, a bit of a maverick philosopher who is mad as hell and doesn’t want to take it anymore. His passion for his material is apparent: his prose is chaotic, raw, and conversational. But this stream-of-consciousness style is a double-edged sword: as Slade jumps from one idea to the next—from discussing feng shui to attempting a new understanding of the Bible—readers experience a rush of interesting ideas that often stumble over each other, leaving his audience confused as to the exact point of his discussion. To be blunt, sometimes it’s difficult to understand what the author is talking about.

Still, even though this book would have problems getting accepted by a mainstream publisher, there’s something about the author that makes you want to put the book down and drink some beers with him. Slade has charisma, which is so often missing in some of the biggest bestsellers.

Where to From Here is structurally messy, in need of serious copyediting, and sometimes lacking in coherence. But brave readers willing to give it a try are sure to find some interesting nuggets and a captivating voice amidst all the chaos.