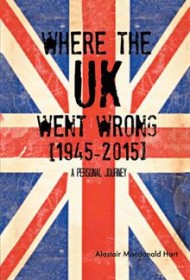 Author Alastair Macdonald Hart recalls the post WWII years in Britain as “a society where you recognize your neighbor and people seem to help each other.” In Where the UK Went Wrong, he examines a gradual negative transformation in the nation, exploring major issues and how each has affected changes and impacted society.

Hart believes for example, that the famous National Health System suffers from overcrowding and high demand leading to escalating healthcare costs. He also argues: that the push for more housing to replace bombed-out areas after the war lured immigrants as unskilled laborers, creating insular, potential hotspots within the country; that the rebellion of unions in the 1980s resulted in privatization of large industries (energy, transportation), in turn causing loss of jobs and higher prices; that UK politics have become increasingly “Americanized,” with elected officials winning votes by being camera-friendly rather than necessarily competent. Hart writes that former neighborliness has given way to a populace driven by “the desire to earn enough money to enable you to live in an area of like-minded…people of the same class.”

While Hart’s points all have the ring of truth, some may question the book’s credibility. He states at the outset that all his facts come from the Internet, and so offers no footnotes, index, or bibliography. He suggests few solutions to the problems he cites, the main one being for Britons simply to abandon the political party system altogether. Additionally, readers will want to know more about Hart himself; although he calls the book “a personal journey,” autobiographical information is largely lacking.

The book’s lack of sourcing puts it in the realm of unsubstantiated opinion, rather than solid argument, which is likely to deter many readers. Even so, Hart writes in an educated and engaging fashion, and readers, especially those on the other side of the ditch, can learn a great deal here about how government and organizations function in the UK.