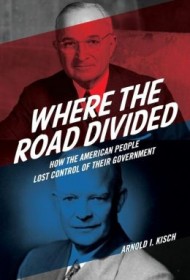 This interesting book, the second work of history written by retired health care professional and university professor Arnold Kisch, is actually two books in one.

On one level, the book offers a solid survey of American history from 1945 to 1960. It is a period that clearly interests the author (more from the political/military point of view than from social issues), one that, as he makes clear, he sees through the eyes of those born, as was he, between 1925 and 1945—a group well known in the literature as the “Silent Generation.” Yet this is not a memoir sprinkled with historical tidbits; Kisch acquits himself well as an amateur historian. Although he does not share the depth of his research with his readers (his notes are sparse, and there is no bibliography), he has a good command of his facts. As important, he weaves an engaging narrative of this exciting period, from Truman to Sputnik, from Ike to Jack.

On a second level, Kisch purports to offer what is a rather interesting hypothesis: that this period was the time in modern American history when American leadership “set a precedent that has paved the way to the alienation that exists today between the American people and their government.” This belief was one of the pillars of postwar conservatism, and it is one that scholars have debated for decades (most recently in Michael J. Glennon’s new book, National Security and Double Government). Unfortunately, Kisch often abandons this thesis for long stretches of narrative in favor of his survey of Cold War America.

Thus, from the point of view of the thesis of an isolated America, Kisch leaves the professional historian wanting more. But general readers will appreciate the author’s historical account. As a good story well told, Where the Road Divided will both entertain and illuminate.