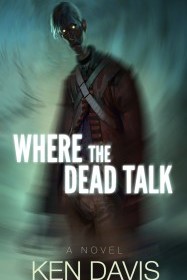 It’s a formula common in some of the most compelling horror stories of the past 50 years: a narrative that pits a ragtag team of survivors against a horde of bloodthirsty monsters.

Ken Davis takes cues from countless modern zombie stories in his novel Where the Dead Talk, an eerie tale featuring an innovative twist on this standard plot device: the action is set in colonial Massachusetts on the eve of the Revolutionary War in 1775. Thus, scenes that normally play out in shopping malls in movies like Dawn of the Dead unfold in the rural setting of 18th century colonial America.

As townspeople in the small village of West Bradhill form militias and head to Boston to wage battle against British military forces, a much more sinister and ancient threat emerges. The dumping of a body in a lake nestled in the woods nearby opens a gateway into another world, a portal that unleashes a mysterious and contagious sickness. Corpses come alive, the dead roam the roads and monsters attack the homesteads of the living.

As the ranks of the undead quickly swell, Thomas Chase, the youngest boy in a local family of patriots, is forced into an unlikely alliance with British Major William Pomeroy. Along with a small band of militiamen and local villagers, they engage in a fight to survive the night.

The dialogue lacks historical authenticity at times and Davis’ descriptions can feel far too wordy and flowery. In addition, the detailed gore may be a bit much for sensitive readers (“Each time the Major swung the butt (of his musket) down, it went further into the back of the thing’s head… Wet bits of gore flew up from the musket in a spatter, hitting the ceiling and the wall.”). Despite this, the author offers many genuinely unsettling and eerie moments, and the entry is a fresh take on a genre that’s seen plenty of variations and reinventions.