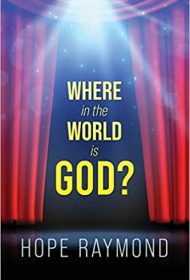 Hope Raymond’s Where in the World is God explores the evolution of human consciousness from our earliest myths to our current technological era, offering speculation on the role of spirituality.

The book offers three sections. Part One explores the rise of Judeo-Christian tradition in which humans defined themselves in relation to God before science eroded traditional beliefs. Raymond views this as an adolescent stage of spiritual maturation in which humanity, no longer clinging to religion, turns inward. In Part Two, the author investigates factors accelerating cultural change (e.g. technological innovation and globalism) and how they impact our humanity. Part Three attempts to combine these themes and look ahead.

Part Two contains Raymond’s most engaging work. The breadth of research and scope of subjects is staggering. Topics include the evolution of family structures, the rise of virtual reality communities, and the impact of generational shifts in the workplace. The quality of writing and research is on a par with notable authors of popular sociology (e.g. Jeremy Rifkin or Neil Postman), but it feels dated. Most of the “current” events described occur during the Obama administration; discussion of same-sex marriage centers on individual state fights rather than Obergefell v. Hodges; and remarks on reproductive rights hit differently in a post-Roe America. Raymond clearly attempted updates, but they read like afterthoughts.

If the book’s core is a work of social science, the rest falls in the Venn diagram overlap of Jungian psychology and New Age metaphysics. One through line, however, is Raymond’s faith in millennials (she’s silent about Gen Z), who she thinks are better equipped than past generations to confront humanity’s spiritual crisis, a thought Raymond hastily articulates before abruptly ending the book.

Where in the World is God fascinates with its detailed analysis of social issues. But the themes of the sections don’t quite gel with one another, the overarching thesis never fully materializes, and her analysis is just too dated to realize its desired impact.