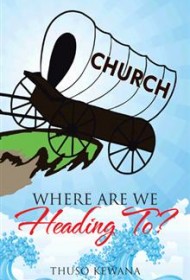 In this thoughtful and well-written volume, Pastor Thuso Kewana, of Heart to Heart ministries in South Africa, challenges Christian leaders and congregants to question ideas that come from the pulpit as he warns of the dangers of “prosperity preaching” in some churches.

Prosperity preachers imply that God provides wealth to those who give financially to the church. Kewana charges that these preachers “don’t teach the flock [congregation] the truth about the word of God; instead they tell them lies and manipulate the flock’s emotions for their own benefit,” with only the preachers “prospering.”

The book addresses issues that often accompany prosperity preaching. For example, one chapter speaks of pastors who claim that their churches belong to them, even registering the churches’ properties in their names. Another chapter speaks of prestige-seeking pastors who want to be called by their numerous earned (or purchased) academic titles instead of simply “pastor.”

Kewana admits that some readers will disagree with him, but he asks that they look to Scripture before accepting that every word spoken by pastors is from God. He says, “In the absence of truth, people begin to believe in lies….The devil is the father of lies, and the truth comes from God.”

Where Are We Heading To? is a call for dialogue and introspection. In this slim volume, Kewana reminds readers that “the truth of the word of God is in the Bible.” He states his points and backs them up with Scripture—demonstrating what he wants his readers to do: test every human thought by the word of God.

This book should find an audience with both church leadership and laypersons who want to know more about or are involved in churches that preach prosperity. Kewana succinctly presents his concerns; whether readers agree with him or not, his thoughts will be fuel for ample discussion.