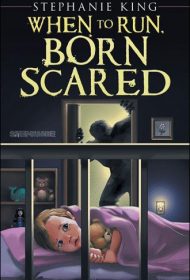 Stephanie King’s horror novel, When to Run, Born Scared, centers on protagonist Stephanie, who struggles to free herself from the horrors of her life.

The story’s first part offers background into Stephanie’s life, proposing that evil is genetic, meaning that one person in each generation of her family is a “Monster.” Thus, her violent father causes the miscarriage of his first child and sexually abuses Stephanie from her early childhood, and her evil older sister, Leanne, arranges to have Stephanie gang-raped when she’s a young teen. Although her mother is sweet, she’s passive and of no help to Stephanie.

Despite all, Stephanie initially succeeds when she leaves home to find employment and live on her own. Yet her poor decision-making—trusting her sister, picking up one-night stands, taking any drugs she can find, etc. –spirals her into further horrors.

The book is well written overall. The characters, especially Stephanie’s antagonists, elicit raw emotions from readers, and the graphic descriptions are as haunting as intended.

One issue, though, is that most exceptional horror novels, be they supernatural or grounded in reality, like this one, offer positive elements to balance the evil. This doesn’t happen here, resulting in a depressing read (while also demonstrating that real demons can be more frightening than anything that goes “bump in the night”).

With all the terrors thrown at Stephanie by her own body, her cruel father, amoral sister, and just about everyone else she encounters, it’s a wonder Stephanie survives. It’s similarly hard to imagine how she will live through Among the Guilty and Under Attack, the next books in King’s trilogy. Undaunted readers will have to follow her to the sequels to find out.