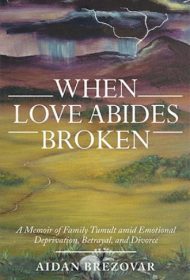 Father Aidan Brezovar unravels the tangled threads of his family relationships in this self-reflective memoir about marriage, divorce, betrayal, trauma, and above all, an ever-lasting faith in God.

After his elderly mother survived a cerebral hemorrhage, Brezovar left his life in the Midwest to move in with her and her millionaire husband and easily settled into chores on the sprawling ranch. He quickly discovered, however, the dark, emotional abuse his mother was enduring at the hands of her husband, Al.

With beautiful imagery, Brezovar details how his stepfather – a narcissistic, “seventy-eight-year-old toddler” – controlled his mother through manipulation, noting that “the only light in the temple was the vigil lamp burning at the altar of Al’s own need.” Brezovar meticulously details the events surrounding what he refers to as his and his mother’s “Exodus” from the oppressive ranch and her marriage.

Raised in Catholic schools and monasteries and retired from ministry, Brezovar’s choices and seasoned advice weave a theme of steadfast love for God throughout the work. His attention to the intricacies of family relationships and the repercussions that ripple through generations is heartfelt and transparent.

Unfortunately, the memoir often falters. The main characters and overall struggle are well-established in under 100 pages; over 300 pages remain as the storyline creeps along weighed down by the author’s excessive attention to mundane detail, such as where the author’s dog defecated and what he had for dinner.

Additionally, eventually readers may begin to doubt Brezovar’s motivations for writing. His stepfather and brother begin leveling public accusations against his character, sexual preferences, motives and more. His brother Doug even mass emails Brezovar’s parishioners, publicly airing his personal family grievances and humiliating Brezovar. The memoir then focuses on Brezovar’s explanations for his actions as he becomes preoccupied with clearing his name.

The length and daunting detail of Brezovar’s memoir will likely deter most readers. Still, those dealing with situations involving narcissistic disorder, manipulation and emotional abuse might find it instructive.