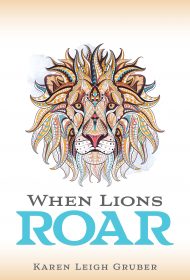 Marital discord and an ancient prophecy unite in Karen Leigh Gruber’s creative two-fold tale. Here, human and animal behaviors showcase the power of friendship, motherhood, and the ability to trust one’s own voice.

Maggie’s marriage to successful photo-journalist David has come at a high price. While others envy her seemingly fairytale life, David’s controlling ways behind the scenes have slowly eroded Maggie’s self-esteem. Meanwhile the heightened household anxiety has trickled down to 8-year-old daughter Hannah. When David’s work assignment takes the family on a month-long trip to Africa, amidst a landscape of both inhumanity and raw natural beauty, Maggie faces a mother’s worst nightmare with Hannah’s sudden disappearance.

Intertwined with this plot, Gruber weaves a prophetic tale involving a wicked serpent that has cursed the Maasakai Kingdom. As lions battle for love and reign, a foretelling reveals a Golden Creature who will purge the curse and a lioness who will reclaim her wisdom and courage.

This multi-faceted story moves easily between the plight of Maggie’s marriage, the drama of her missing daughter, and the Maasakai Prophecy tale. Gruber also builds poignant human connections as Maggie finds solace in a friendship with an African mother who lends care and support to the fragile American coming to terms with her own destructive lifestyle. Gruber aptly incorporates the dark continent as the perfect backdrop — “a balm for my soul” — for Maggie’s cathartic change.

On the down side, the prophecy verse outlining the Maasakai tale seems repeated to excess, and the intermittent commentary between a matriarch elephant and calf relating the ancient tale, seems unnecessary. Additionally, a surprising twist takes this story into the blended realm of reality and fantasy. The crossover may seem too farfetched for some readers.

For those who can accept the conceit, however, When Lions Roar is a delightfully unexpected offering that should satisfy readers drawn to central female characters that rise above their circumstances and transform to a higher sense of self.