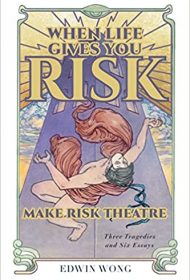 Wong claims that the engine driving tragedy shouldn’t be viewed as Aristotle’s fatal flaw in a great man, or Hegel’s conflict between two ethical goods, or even Nietzsche’s struggle between the Apollonian and Dionysian. It should be seen as a chosen risk thwarted by an improbable chance. Thus, Macbeth’s tragic end comes, not from his overweening ambition, but from his choice of murder and becoming king against the unlikely possibility of Birnam Wood moving to Dunsinane.

This approach to tragedy, where “low-probability, high-consequence events trigger the hero’s fall” is, writes Wong, more relatable to our “present age of uncertainty” than Aristotle’s pity and fear.

To demonstrate his concept, Wong held risk theatre play-writing competitions, and three outstanding entries are included: Gabriel Jason Dean’s “In Bloom”; Nicholas Dunn’s “The Value,” and Emily McClain’s “Children of Combs and Watch Chains.” These strong plays should trouble readers long past the reading, partly because the topics are difficult (child prostitution, Nazi art theft, and child procurement) and partly because their moral consciousness lies less with the actors than audience members, who watch in horror as the documentarian participates in child victimization, as the art thief, regardless of the painting’s provenance and his friends’ needs, drives the bidding higher, as the would-be loving father purchases a child.

Wong concludes with six essays examining “the relationship between risk and literature.”

It’s hard to see risk theatre, as “the boldest advance in tragic theory since Aristotle’s Poetics.” Too many discussions leave questions, such as why risk theatre should take precedence over existentialist, post modernism, or absurdist theatre. Moreover, the contest examples could easily be seen as other types of theatre (e.g., Aristotle’s fatal flaw in “In Bloom”). Wong’s presentation suffers for not acknowledging this.

If not the boldest advance or most aptly modeled, risk theatre is, nonetheless, another thought-provoking lens through which to view drama.