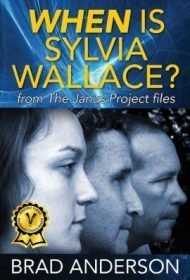 In When is Sylvia Wallace?, characters from Brad Anderson’s two previous storylines (The Janus Project and the Guardians trilogy) meet in a riveting, adrenaline-fueled time travel thriller in which two adventurers attempt to find a deputy U.S. marshal lost in the future.

When Sylvia Wallace finds herself somewhere in a future Earth—or a parallel universe—where the Janus Project (a top-secret government program) no longer exists, she realizes quickly that she must find a way to survive, until —and if—rescuers can locate her. As Wallace attempts to survive in a post-apocalyptic world, Colonel John Callan (from The Janus Project) and Deputy U.S. Marshal Robert Mackie (from the Guardian trilogy) risk their lives to rescue their friend.

After locating the time in which Wallace is stranded, the two travel to 2036, where they find a planet irrevocably changed: The eruption of several super volcanoes less than a decade earlier has brought humankind to its knees, and as civilization struggles to rise from the ashes, corrupt individuals have grabbed power for their own twisted motives. When Callan and Mackie discover that Wallace is being held in a town ruled by a criminal thug and his cronies, they must find a way to save her, and the entire town, which the thugs plan to destroy before fleeing to a safer area.

It all adds up to an utterly satisfying science fiction thriller. The pacing is relentless, the characters all well developed, the world-building richly described, and the backstory believable. Some readers may wish for more information about Wallace’s past and the specifics of the Janus Project, but such details are unimportant to the story as a whole.

Essentially a sampler for Anderson’s previous work, this gripping tale will have readers unfamiliar with his earlier stories seeking out these novels ASAP. Simply put: this is a highly appealing fusion of time travel adventure and post-apocalyptic thriller that is virtually impossible to put down.