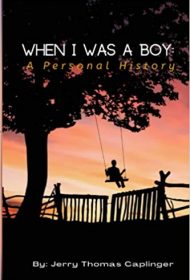 Jerry Caplinger’s bucolic wartime childhood spanned both Arkansas and rural Oklahoma. In When I Was a Boy, the author traces his life through boyhood to adolescence and the search for a job.

Caplinger and his family had very little; the town did not yet have electricity, and they largely lived out of the family garden. But they were generally happy together, even though his father could be unkind. Eventually, he joined the Air Force and found it a great adventure.

Caplinger’s story is full of meticulous detail of what life in rural America was like in the 1940s; domestic historians would thrill to the individual, careful descriptions of how farms and homes ran, including stories of working the backyard wash-house, peach packing, and churning butter. Taken as a whole, however, the descriptions read as unnecessary and burdensome; in one instance, he describes the circumstances under which his high school allows him to drink from a water fountain. In another, he describes all of the exercises undertaken by his high school football team at practice.

There’s very little forward momentum in the story, with no narrative drive to keep it moving. Readers are likely to be surprised by how frequently he talks about what he doesn’t remember, doesn’t know, or can’t quite recall, the effect of which is a taciturn distance: “Breakfast was fried bacon and eggs cooked in an iron skillet over an open fire. I’m sure it tasted great.”

Meanwhile, major events are skipped over. The last page of the book shows him coming back from a tour of duty to greet his wife and daughter, both of whom we are hearing of for the first time.

Overall, the memoir reads like a grandfather telling his story around a fireplace to grandchildren who love him and have a vested interest in the small details over the plot. As such, this is likely to find most success as a family treasure.