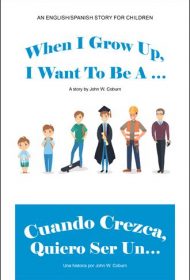 In this English/Spanish bilingual book, a boy imagines all the careers he could pursue and the skills he’ll need to do so.

The first-person narrative introduces readers to a boy who can’t decide what he wants to be when he grows up. Lying in bed, he ponders whether he could be a construction worker, accountant, electrician, or plumber, among other choices. As he considers different careers, he points out the interesting things he could learn through them, or how he’d help others in that line of work. Ultimately, he also thinks of his hardworking mom and dad, who often fulfill many different roles in his home, and wonders whether he’ll be a parent one day.

Part of a series intended to help young readers practice both Spanish and English, the story is presented in both languages, with English text on the left-hand page and corresponding Spanish text on the right. There’s also a two-way index of various words at the end, with page numbers of where they appear in the story.

The narrative moves from one career to the next, and each page comes with a unique illustration. The line drawings are simple but effective and seem aimed at middle grade readers rather than a younger audience; the same is true of the text, with words such as “extinguish,” “profit,” “ill-tempered,” and “junction box.”

The pictures show the young male narrator in each role (outfitted as a policeman, a carpenter, a firefighter, and so on). This may be off-putting to young female readers, which is unfortunate given that girls might be interested in any of these professions.

When I Grow Up I Want to Be A… uses the same structure as its companion book When I Go on Vacation with My Family, but its more complex vocabulary and limited cast may make it less successful at drawing in young readers. Still, those children seeking to learn a foreign language will gain helpful practice here.